Think of a carp today and you’ll probably picture either a large semi-scaled fish that’s nearly as big as the angler who caught it, or a sleek multicoloured fish in a koi pond. Both are cultivated forms of a once-wild fish. One variety, from Europe, was bred to grow large for eating; the other, from Asia, for its ornamental appeal.

The European carp bred for eating (now also for their value to anglers) are the result of nearly a thousand years of selective breeding by fish farmers. This has resulted in cultivated strains of ‘king’ carp that grow quickly and can reach weights of 100lb. Some were bred to be semi-scaled (known as mirror carp) as they required less preparation (descaling) before cooking. Some (known as common carp) retained the original full scaling of their ancestors.

What, though, became of the fish from which the modern strains were cultivated?

The original true species of wild carp evolved in the Black, Caspian and Aral seas following the last Ice Age. These fish then migrated into and up the rivers that drained into these seas, most notably the River Danube. They were still prolific in the Danube in the 1950s, sadly they are now virtually extinct.

Known locally as Sazan, the original, true wild carp were driven from existence by people who channelised and built vast hydroelectric dams across the wild carp’s native river (the dams flooded the Danube’s once shallow spawning plains) and by others who cultivated new strains of carp which unfortunately made their way back into the Danube and cross-bred with the originals.

The true wild carp now exists only in isolated shoals living in rivers such as those draining into the Black and Caspian seas (notably in Thrace, Northern Anatolia and eastern parts of Greece) and in protected living gene banks (lakes) sponsored by research institutes such as the Research Institute for Fisheries and Aquaculture (HAKI) in Hungary. 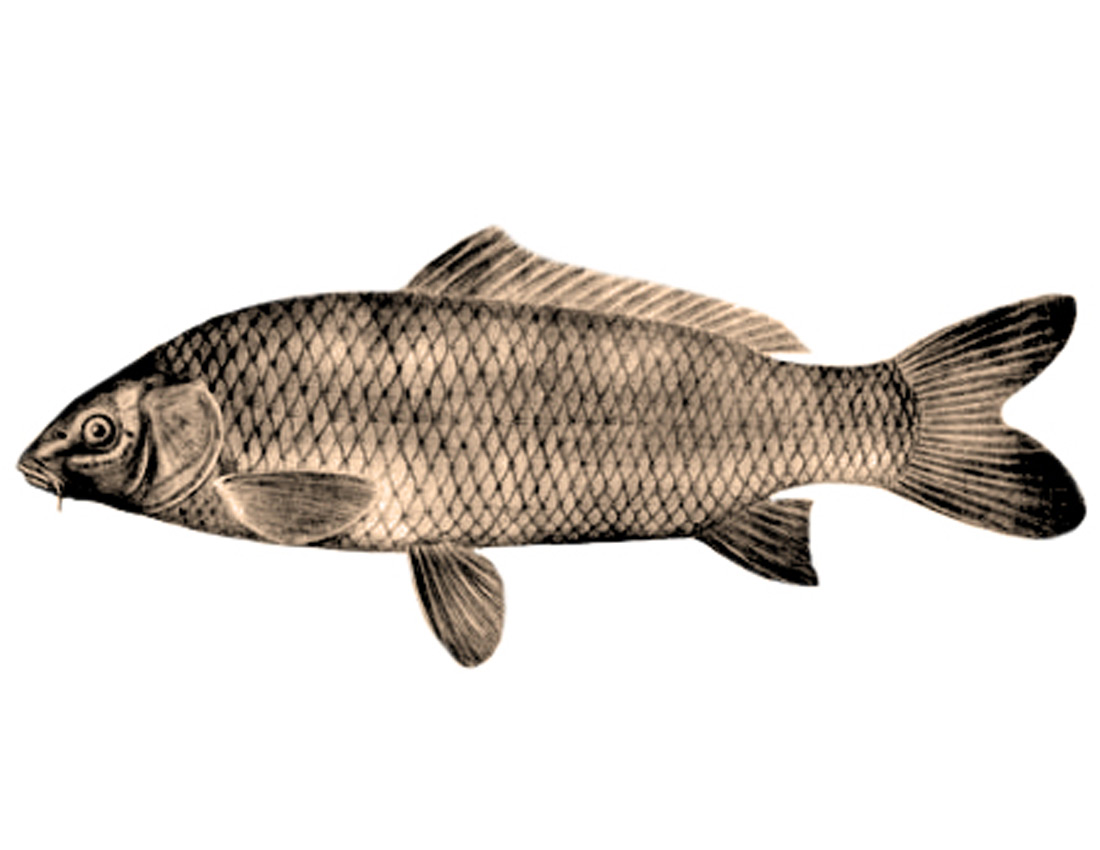 When the Roman Empire reached the Danube, at a place called Carnuntum (opposite the modern-day Devin Castle near Bratislava, on the border between Slovakia, Austria and Hungary) in circa 15AD, the Romans discovered that wild carp were a regional delicacy. Local fishermen had developed flat bottomed punts that could glide across the shallow plains when the carp were shoaling there ready to spawn. They caught the fish in nets and found them to be very sweet when eaten. (This was because the carp had evolved in the powerful currents of the Danube and developed the ability to store large amounts of blood sugar in their muscles. It also enabled explosive bursts of strength which, combined with the wild carp’s torpedo shaped body and large deeply forked tail, enabled it to swim incredibly quickly.)

It is thought by some that the Romans, being expert fish farmers and entrepreneurial types, would have harvested the carp and exported them to their provinces. (It is speculated that the fish were transported in wooden barrels filled with water.) However, as with the monastic connection below, there is a lack of evidence to prove this. There is evidence that carp were eaten at Roman locations alongside the Danube, though it would appear that they preferred the taste of sea fish when nearer to the coast. 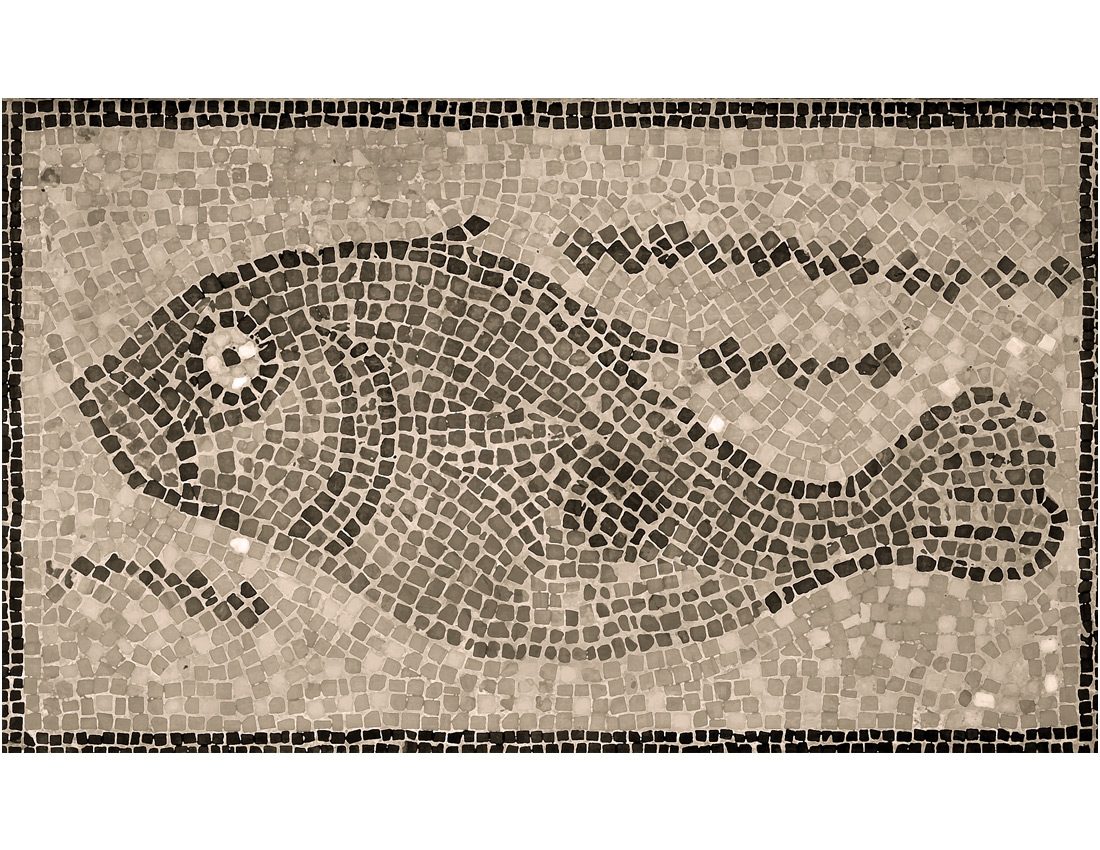 People moved wild carp fry from the Danube (and other rivers draining into the Black, Caspian and Aral seas) and distributed them as far west as the Rhine Watershed by the 12th century and the Atlantic watersheds of France in the 13th century.

Fish farming saw a resurgence in the Middle Ages, encouraged by the spread of the Christian faith and in particular Cistercian monasteries where monks were forbidden from eating meat during their fasting periods. Very old strains of carp can be found in and around the stew ponds of monasteries, particularly those in France.

The Cistercian order arrived in Britain following the Norman invasion of 1066. Folklore tells of British monks eating carp, though archeological evidence suggests that their ponds contained mostly pike and tench. It is more likely that these ponds were stocked with carp at the very end of the monks’ habitation, in the late 1300s and early 1400s, when carp were introduced to Britain. Waters such as Llyngwyn and Pant-y-llyn in Wales support this theory. So whilst not ‘Norman’ by timeline, they are often referred to as such due to their connection with Norman fishponds and the monks. 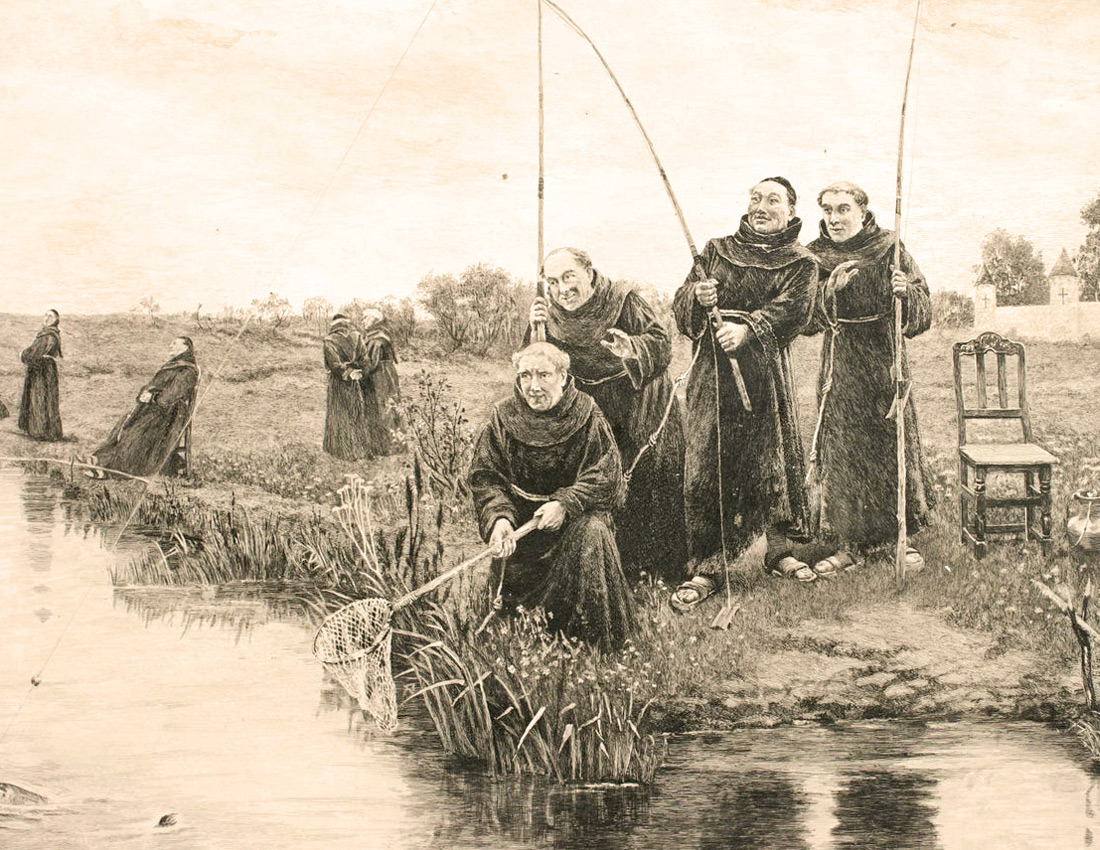 By the 1200s, carp were being ‘farmed’ in Europe. Fry were being taken from their native rivers and stocked into fishponds. In 1258, entrepreneurial fish rearer Count Thiabut V of Champagne stocked huge numbers of carp fry into his ponds at Igny-le-Jard in France. By the early 1300s, large scale production of carp using in-stream ponds and straw as an artificial spawning substrate were in use. In 1367 the Barons of Rosenberg in Wittingau, Bohemia, began breeding carp and transporting them throughout central Europe – especially to Czechoslovakia, Germany, Austria and Poland (where the popularity for eating carp remains to this day). The operation was huge, with circa 30,000 acres of carp ponds in use. It is likely that carp were introduced to Britain at this time (probably in the 1400s) but to be clear: all carp imported to Britain would have been domesticated/cultivated by fish farmers. Thus the true wild carp has never been present in the UK. 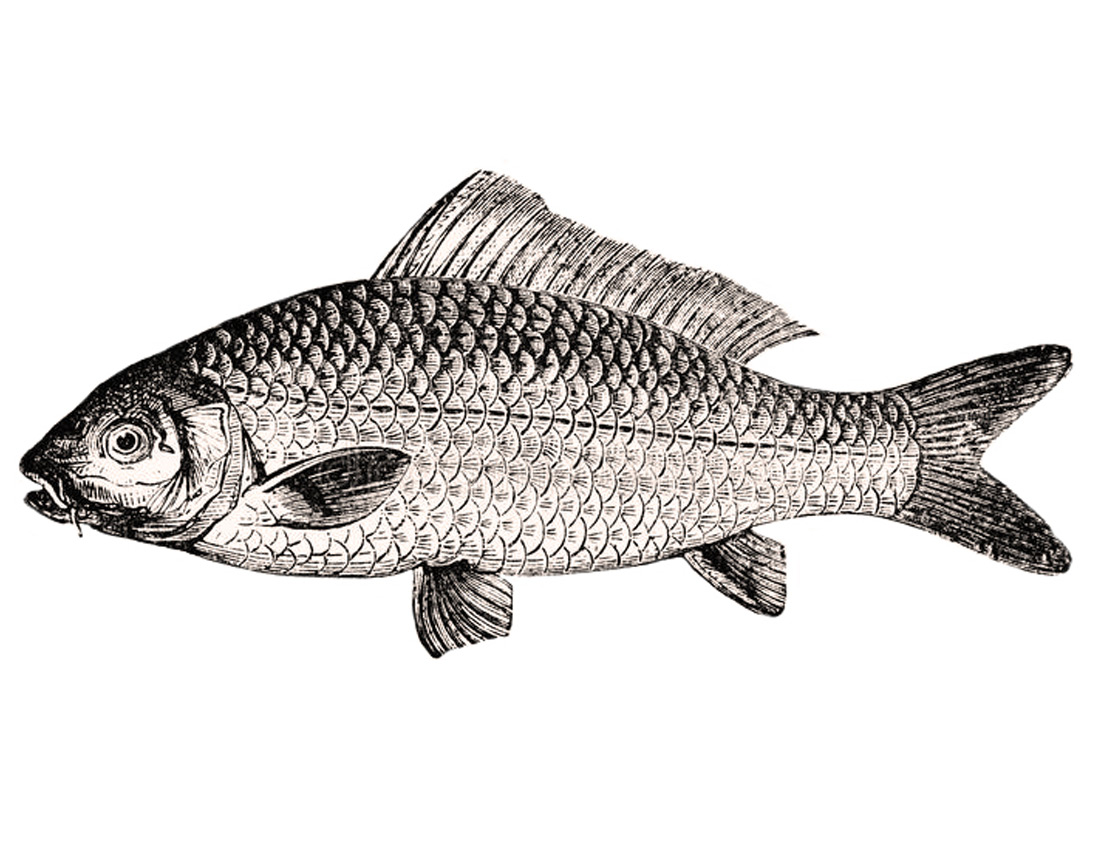 By the late 1500s carp were well established in Britain. They spread further in the 1600s and 1700s due to the trend for wealthy landowners to build lakes on their estates and stock them with fish. (Carp were gifted between these landowners.) Estate records of the time reveal that these carp were streamlined (up to 33 inches long) and grew to approximately 15lb. The trend for estate lakes fell out of fashion in the 1800s, as did the British appetite for eating carp. (Britain, being an island, had a ready supply of low-cost sea fish which were deemed to be more palatable.) Consequently, carp imports and fish farming slowed whereas they accelerated in mainland Europe. This is why some wild carp enthusiasts (wrongly) think that the oldest strains of feral carp exist in Britain. It was only in the late 1800s, and especially from the 1920s onward, that modern strains of ‘king’ carp were introduced to the UK. So the island may have missed out on two hundred years of carp-farming activity, giving its strains ample time to revert to a wild-like form. However, there are waters in mainland Europe that were stocked long before carp were introduced to Britain. 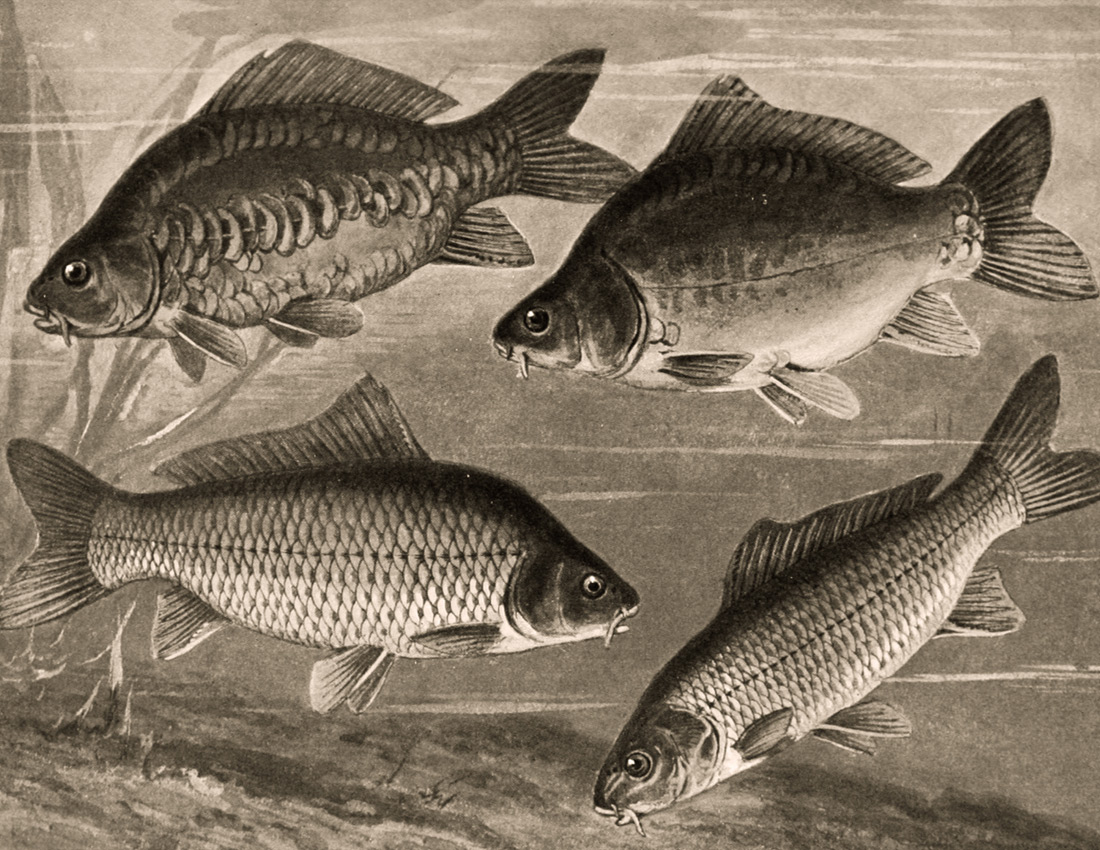 Once freed from the selective breeding regime of the fish farmer, carp revert to a wild-like form through successive generations of breeding (and in-breeding) in the wild. They become smaller and leaner, with fins that appear disproportionately large for their body. Their barbules, often their mouths, become smaller, and their heads may take on a bluntish look. Ultimately their offspring will be fully scaled (no large or partial mirror scaling) and to a casual observer they may look like a genuine wild carp. But they are not wild carp; they are feral carp. The tell-tale giveaway is that all feral carp have a notch behind the head where the shoulders start. (The true wild carp has no notch, the transition from head to shoulders is perfectly smooth.)

As a rule of thumb, the ideal shape of a feral carp has a body length to depth ratio (excluding fins) of 4.5:1 (see the Wild Carp Trust logo for the proportions), with a minimal notch behind the head and no pronounced ‘shoulder’, and tapers evenly to the wrist of the tail (which may seem quite thick for the size of fish). Weights up to 5lb are common, 5-10lb are specimens, and feral carp over 10lb are exceptional. In some waters with rich food sources or low competition, the carp may grow bigger; but rarely will they exceed 15lb. See wild carp identification for more guidance. 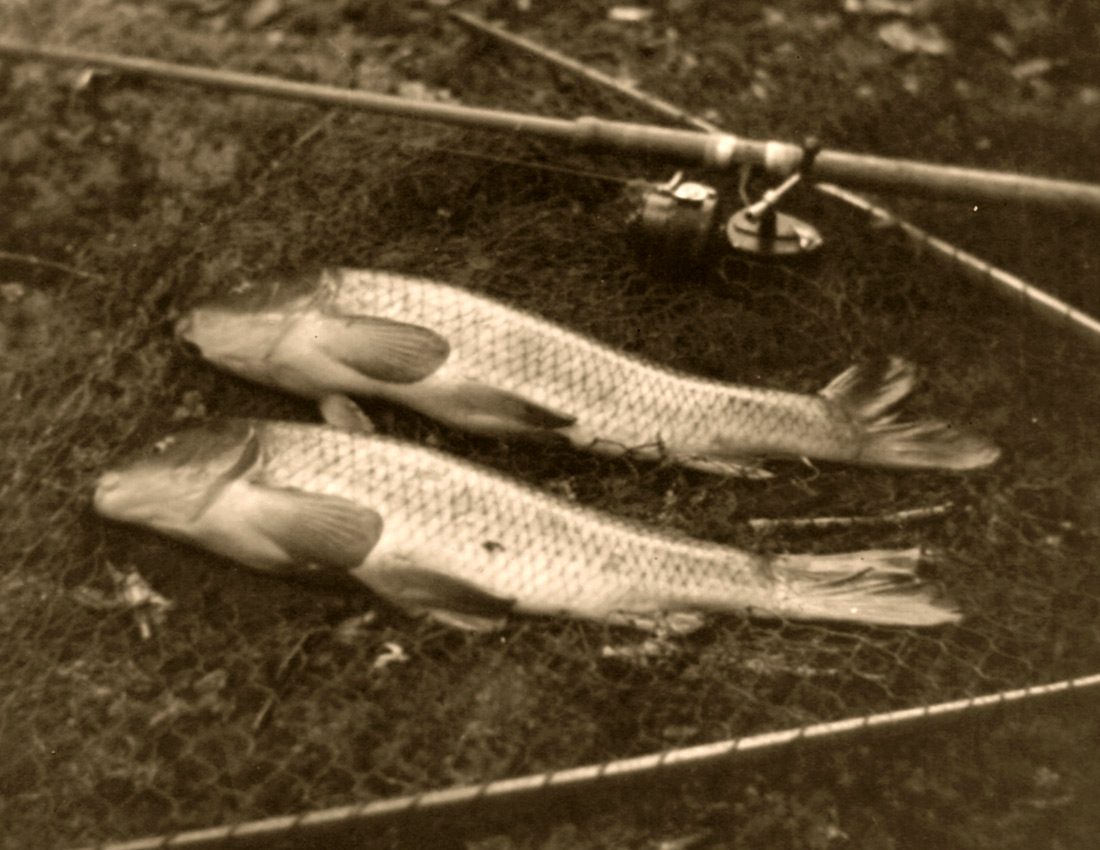 What the Wild Carp Trust is about, in our UK conservation efforts, is the protection and appreciation of our oldest strains of feral carp. The older the strain of carp, and greater the number of years of reversion in the wild, the greater the likelihood that it will resemble a wild carp (hence why we call them ‘wildies’ or ‘wild-type’ carp). It’s also possible that the strain was more wild-like (less cultivated) than modern varieties at its time of stocking, giving it a head start in the reversion race. Whilst the true wild carp might be virtually extinct, these ancient feral forms are the closest we’re likely to get to the ‘real thing’. 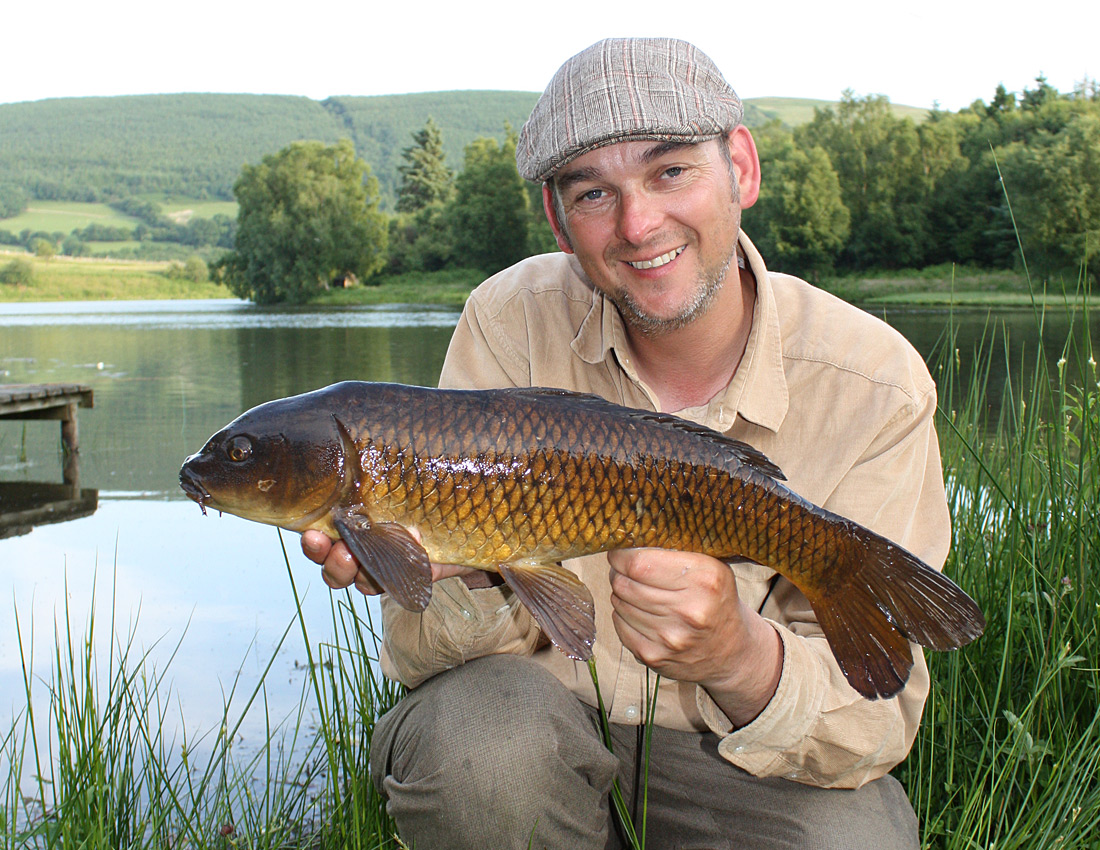 When searching or fishing for wildies, remember that biggest isn’t best. Rather, it’s about the age and provenance of the strain.

“The older the strain, and the greater the degree of reversion, the bigger the reward.” – Fennel Hudson

It's about the strain, not just an individual fish