Wild Carp Trust supporter Adam Fisher shares a story of fishing for wild carp up in the Epynt mountains of mid-Wales, at the famous Pant y Llyn.

Originally published in Improve Your Coarse Fishing magazine in October 2012, the story takes place at around the same time that the Wild Carp Trust was being formed. From then to now, the praise for these wonderful fish has grown to almost the same heights as the mountain upon which they live. 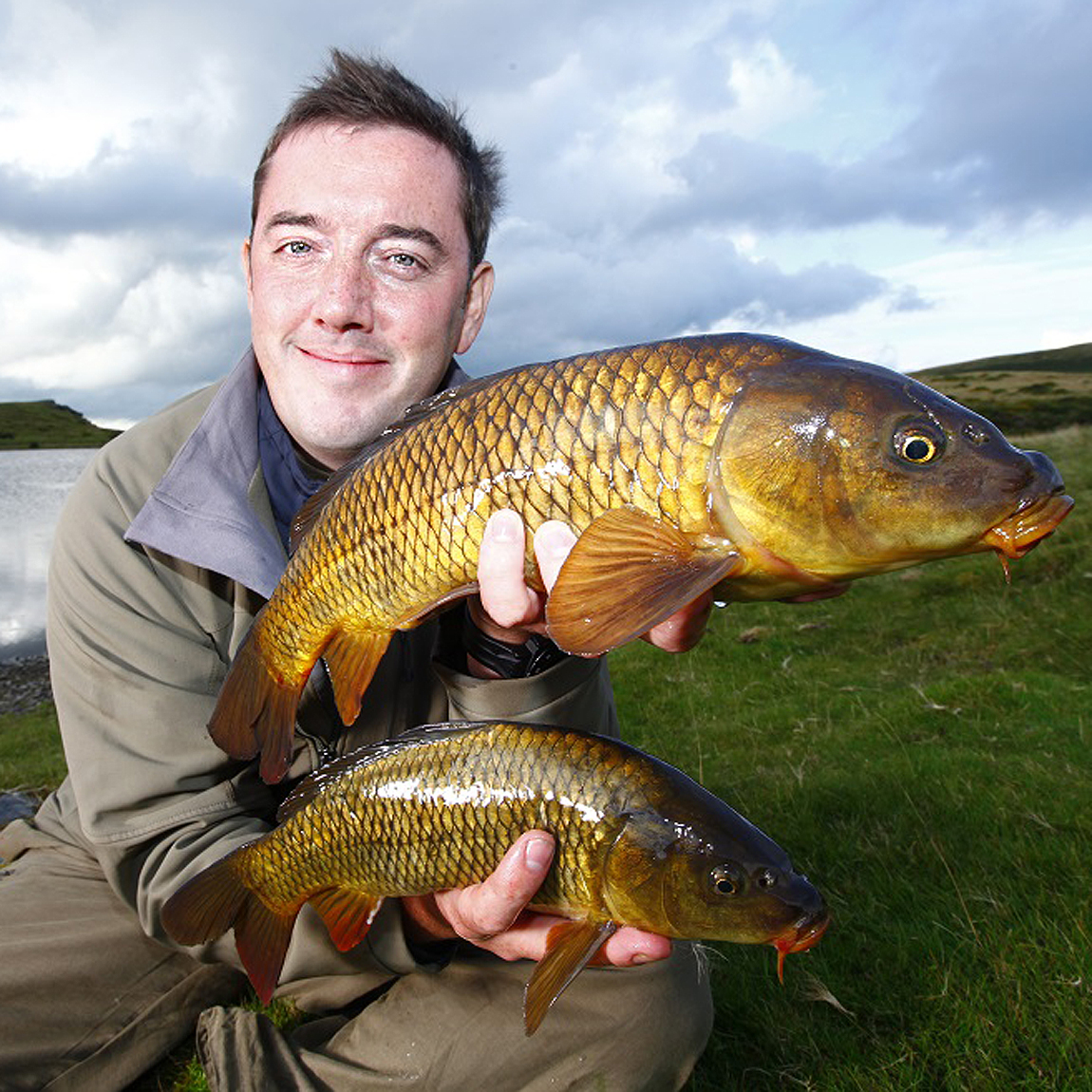 The dictionary definition of ‘mystery’ couldn’t describe Pant y Llyn any better: any affair, thing, or person that presents features or qualities so obscure as to arouse curiosity or speculation.

When it comes to wild, remote, isolated fishing lakes, this place is the daddy! At eight acres, it is secreted on the north-eastern edge of the Epynt mountains, in the shadow of nearby peak Banc y Celyn.

While there’s nothing rare about small Welsh mountain lakes, your curiosity is piqued when you learn that this one is stuffed with wild carp, minnows and even chub. 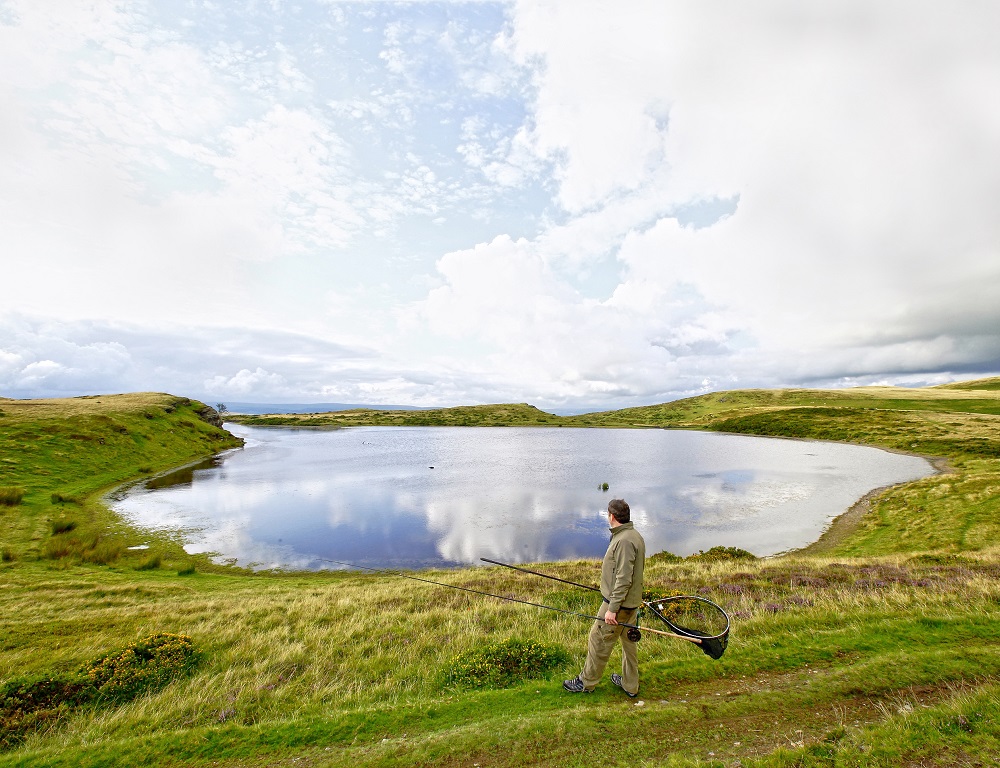 Considering that Pant y Llyn is nearly 1400 feet above sea level, around a mile from the nearest road and five miles from the nearest town, Builth Wells, the obvious question is what the hell are they doing in here.

As far as ambiguities go, this one is straight out of the pages of an Agatha Christie novel. A fish, native to [Eastern Europe and] Asia, found at the top of a Welsh mountain. It’s a real head-scratcher.

And not even Adam Fisher, freelance fisheries consultant, can shed much light on its fishing history.

“Well coloured, thick with weed and packed with fish,” Adam explains, “we know very, very little about the lake’s stocking. As far as the current landowner knows, the fish have always been in Pant y Llyn. Why this is remains a mystery.”

To look at this strangest of waters in more detail and hopefully put a few of its current residents on the bank, we joined Adam on the mountainside. 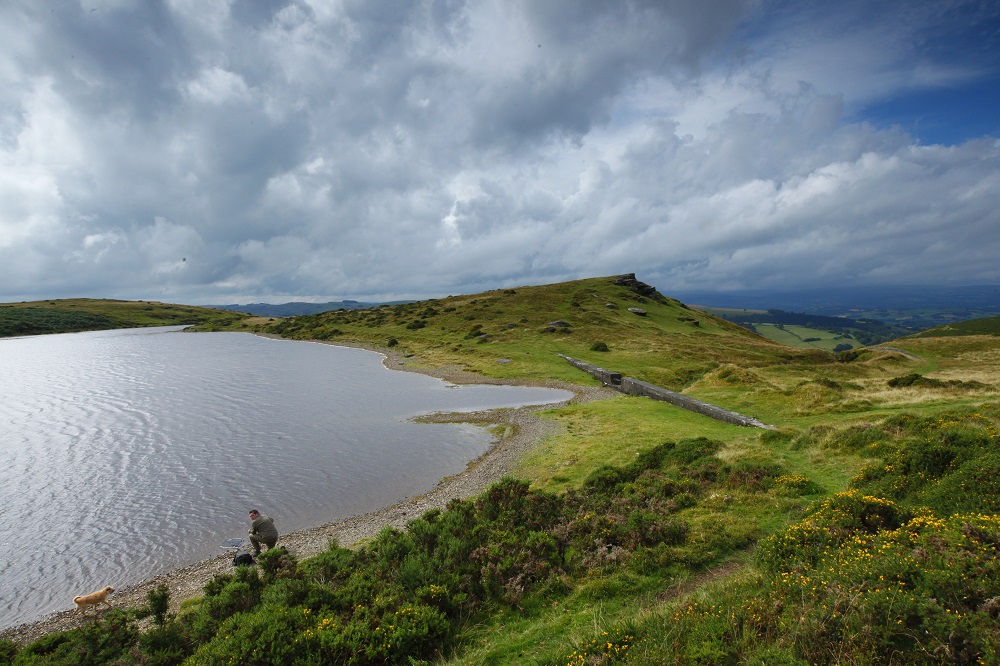 Fishing for wild carp, high up amongst the Gods.

A most unusual fishery

Pant y Llyn probably started life as a corrie lake or tarn. These are mountain lakes or pools, created when rain or river water fills a concave cutting made by a glacier in a hillside. Although Adam is not wholly convinced that Pant is a corrie lake, it has definitely had some form of excavation work done during its life as indicated by a pair of small bitumen dams at one end of the lake.

“These structures add to the lake’s strangeness,” Adam added.

“The one thing we’re not short of in the Welsh hills is rain, so why go to the bother of damming such a small water as this for irrigation? Also, there are no crops grown up here either, so what would they be irrigating anyway? It seems more bother than it is worth.”

As for the fish stocks, the incongruity there is palpable, although there are two wild carp waters close to Pant-Y-Llyn. One is eight miles south at Dderw Farm (Abbotsmere) the other an 11th century Monastery Stew Pond, at Llyswen. The second water is the 16-acre mountain lake at Llyngwyn. Monks at the nearby Abbey-Cwm-Hir again stocked this in the 12th century.

The common theme with both these waters is that they are close to the River Wye trade routes and civilisation, so the fish were originally stocked for food.

Pant y Llyn, however, is a quarter-mile above sea level and brings a new meaning to the word remote. It’s a very odd place to put your larder, unless the monks of Wales happen to be part man, part mountain goat!

“The other thing is that most corrie lakes are similar,” Adam explained. “They are crystal clear with a smattering of weed and hold trout – if anything – due to their cold nature.

“Last winter the Wye & Usk offices at Llanstephan recorded temperatures of minus 17, so up here it must have been minus 20 at least. Yet, these carp survived!

“I’m not sure if these fish are 100 per cent wildies or an ancient hybrid of wildie and king carp, but whatever the reason, they are not just surviving, they’re thriving.” 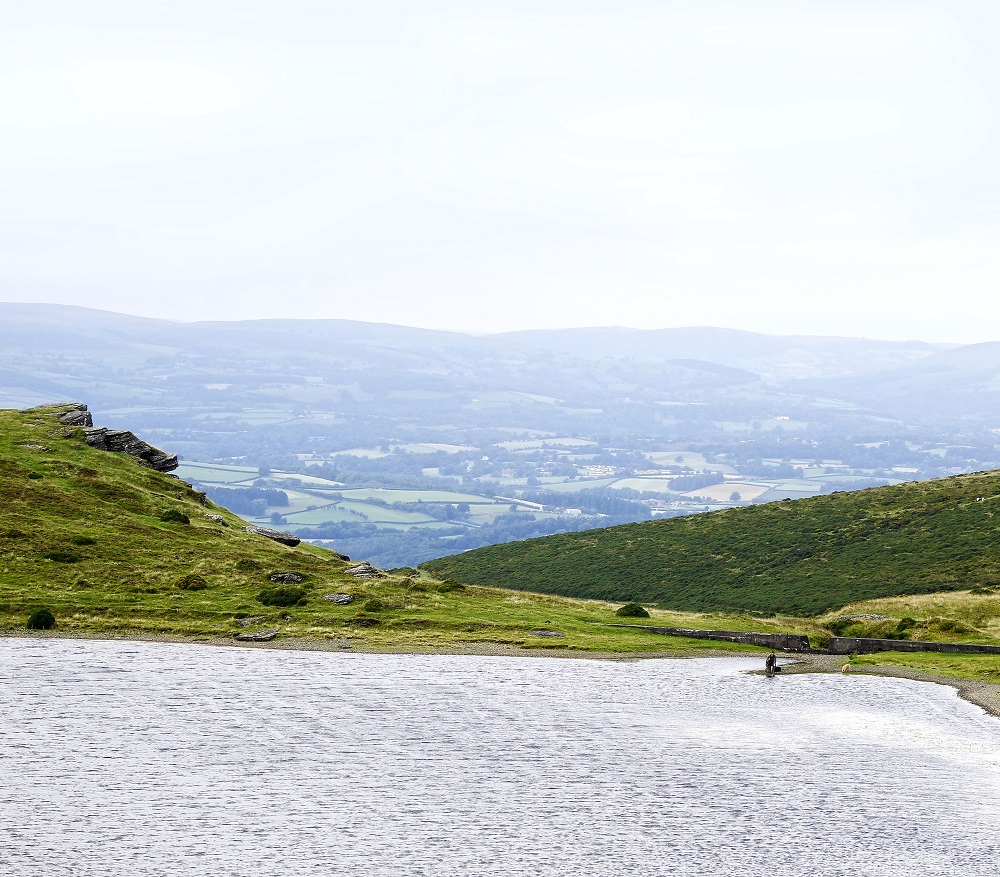 The view from Pant y Llyn. It really is on top of a mountain.

Unlike most carp lakes, where one set of banksticks come out and another set get pushed into the same holes moments later, Pant y Llyn very rarely sees fisherman. The fish are hardly educated to the ways of anglers.

That said, neither are they suicidal. Years of eeking out an existence feeding on various aquatic bugs, grubs and the millions of minnows that also reside in the lake, means they don’t know what anglers’ bait is.

Another problem was that with no catch returns for a couple of years and following one of the coldest winters on record, would the fish still be there?

With plenty of marginal weed around the lake, the first job for our visiting piscator was to put bait in a few areas, then spend some time walking around, watching for fish.

The second time Adam visited his footfalls spooked a couple of fish, kiting out from the margins creating a decent bow wave as they went.

Putting in the usual carping suspects – hemp and corn – Adam found that some of his corn had disappeared during the day, another sign that fish were still around and better still, they were prepared to feed on his baits.

Although he fished the float on the day we joined him, the first time he fished Pant y Llyn, he did it using standard barbel rods and leger weights.

Targeting the area where a stream joins, the lads laid a carpet of halibut pellets, hemp and corn, then fished PVA bags over the top.

“The interesting thing was I fished large fist-sized bags while Nigel used tiny grape-sized bags of pellet,” Adam said. “Nigel had two fish in two casts and I was biteless for more than an hour.”

As soon as Adam started using the small bags, he too started to catch. The fish wanted food, but too much in one area seemed to spook them.

The conclusion was that the fish seemed to feed like starlings, flying in, picking up bits off the edge than flying off again.

A very definite pattern had emerged and one that would stand Adam in good stead for upcoming visits. 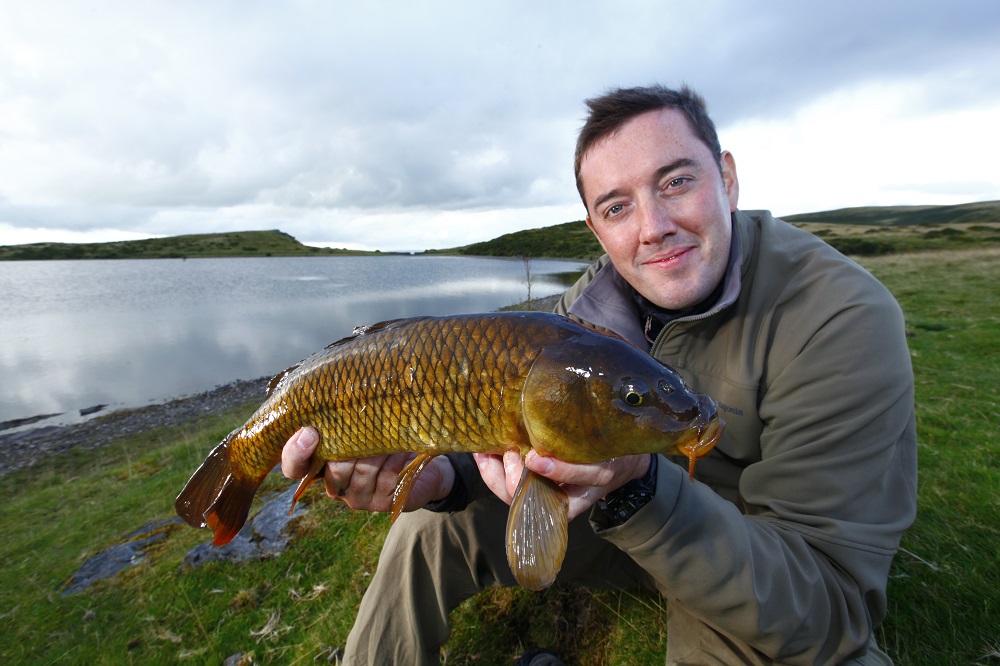 Adam with a fine wild carp from Pant y Llyn

Going with the float

To make for a more pleasing day, Adam chose to use the waggler when we joined him.

Using a typical carp float rod and centerpin reel, he combined this with a 4lb mainline to a 3lb hooklink, terminating at a size 14 hook baited with a single grain of corn.

“From my previous visits, it seems these fish are not ‘educated’ but can be easily spooked, so a little finesse with regards the presentation can go a long way,” Adam said.

“Also, as I’m only fishing a couple of rod lengths out, the use of a centrepin brings a very enjoyable feel to the resultant fight.”

Throwing in a handful of his free feed mix – a tin of both hemp and corn and 4mm halibut pellets softened by the hemp/corn juice – the subsequent surface slick from the hemp and pellets gave Adam a marker to which he cast his float.

By feeding the loose offerings in a scattering rather than a ball, it presented the fish with more of a scattered carpet of bait. Another point their previous homework had highlighted.

As predicted, it didn’t take more than 15 minutes for the float to dip violently before line was ripped off the reel.

“The beauty of a centrepin is it is so tactile. As you use your thumb or finger as the clutch, they are much more sensitive than even the best fixed-spool reel,” he added.

Following a very determined, dogged fight, considering the fish’s size, Adam soon slipped his prize over the rim of his waiting landing net.

The first fish of the day – a pristine wild carp – was his prize.

Repeating these actions, he ended up fishing three different swims through the day, each one producing three or four beautiful, perfectly formed wild carp.

Apart from the click of the camera’s shutter, the splash of the fish and the odd throaty bleat from the resident sheep, the mountainside was wholly silent.

This is the beauty of a place like Pant y Llyn. 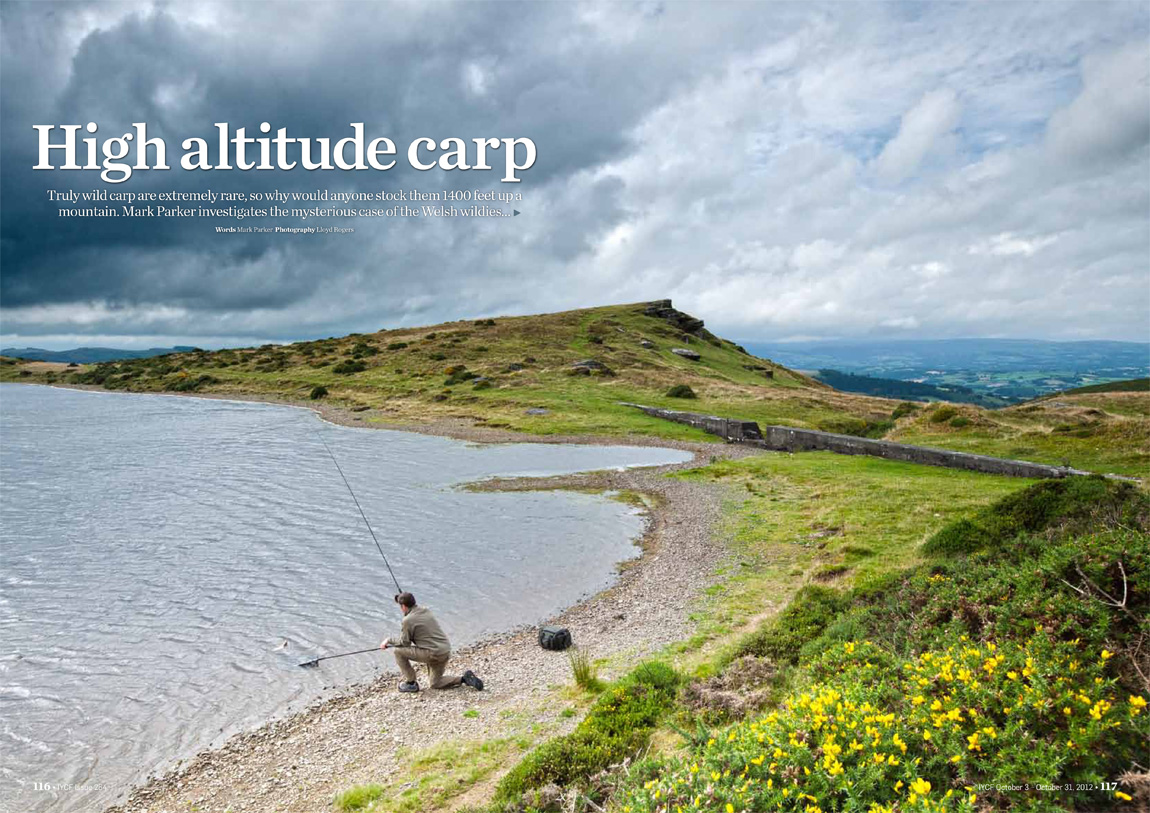 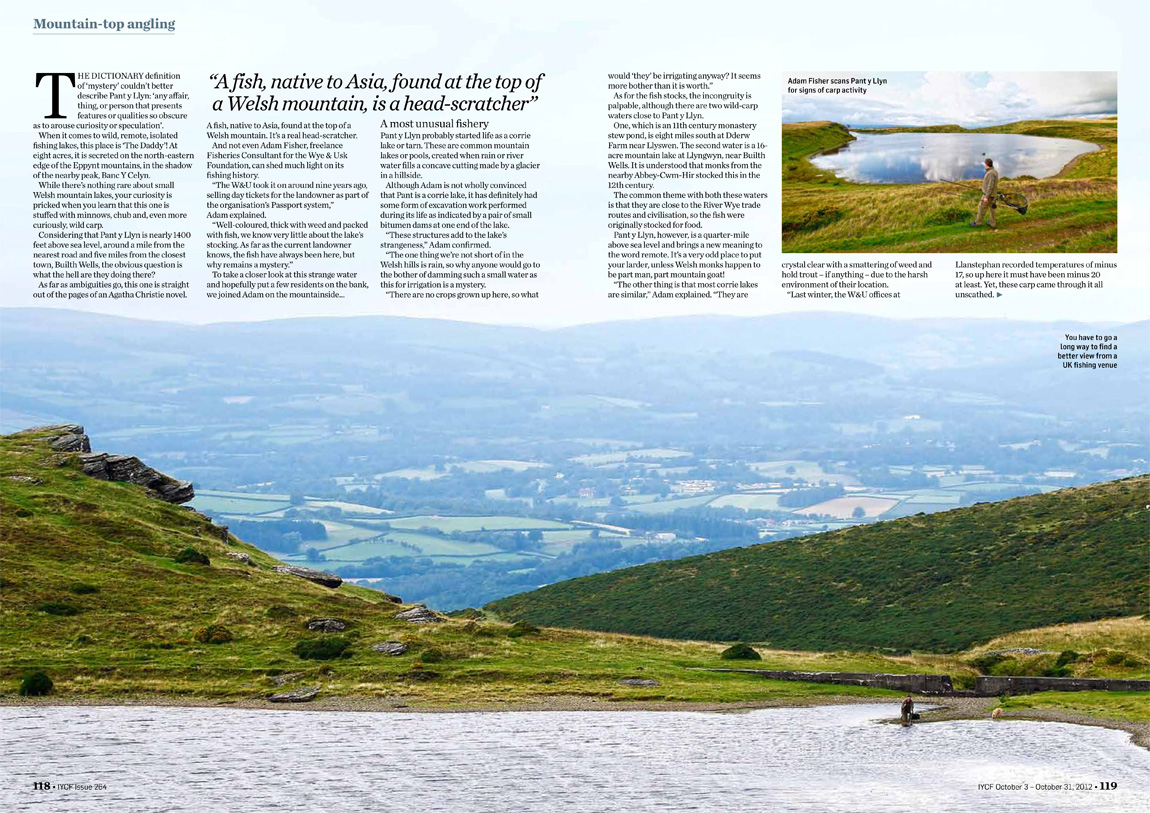 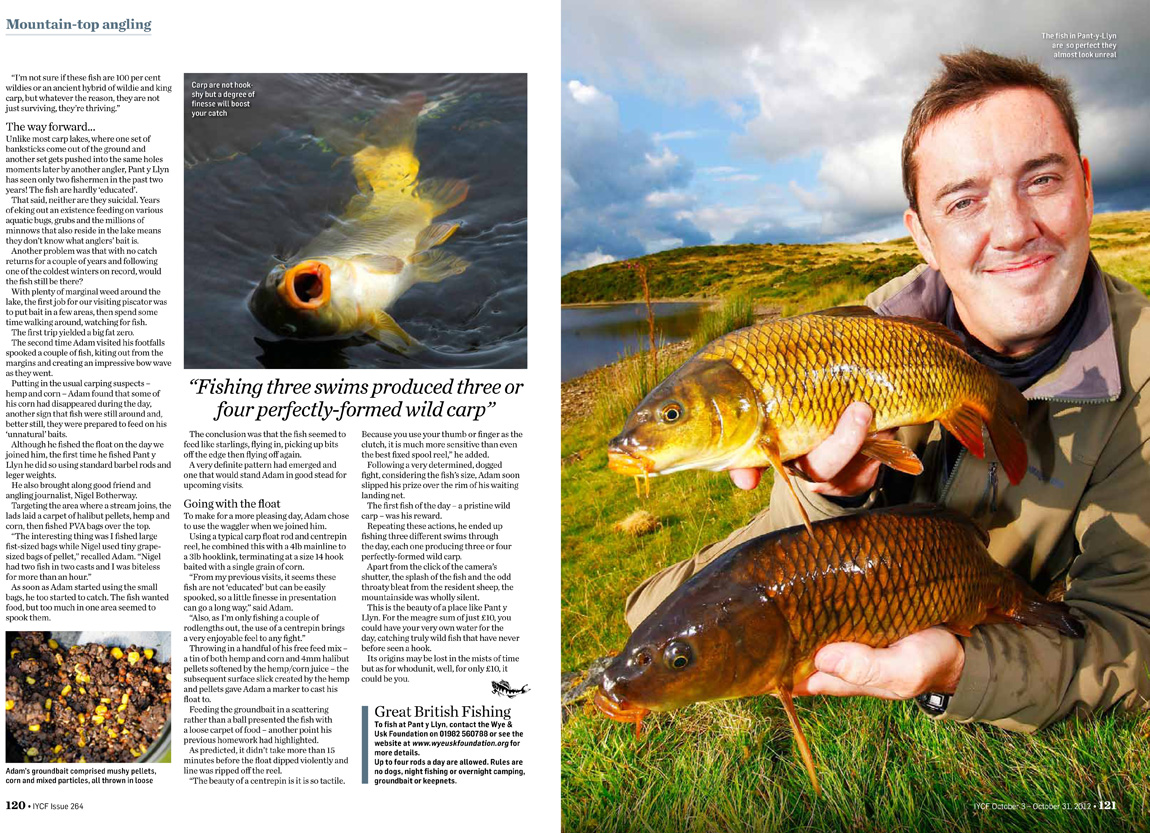